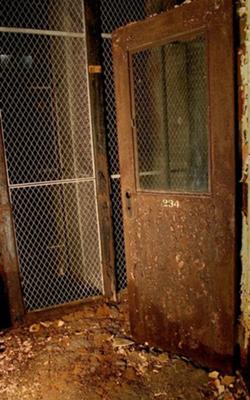 Philadelphia State Hospital (Byberry) was built in 1906 and is now closed do to sewage problems among some brutal stories and the patients having to live in the filth and abuse.

My first trip to Byberry was years ago back in the early 80's and was my last to say the least.

It was dark, cold, wet and just smelled horrible. I remember going with friends but when we got inside after some one pried open a window, we just went in different ways and would meet back in 30 min. We were in groups of 2-3 people.

I remember a few people chickened out as soon as we were inside. I did not want to stay but It was my idea and I don't scare easy.

It felt like a winter night and the moon was so bright. We walked past rooms and some still had padding in them and a dining area that had several old wheelchairs made of wood, it looked like. The walk felt like we were going down a hall, had a slant to it. It lead to the nurses' station where it branched off to different halls.

I do not know if it would collapse under us or what but we walked carefully through the old building.

I saw a homeless man and about screamed. I grabbed my boy friend, John, who had the flashlight and took it from him. He laughed at me and I asked did you see him? When I spotted the light on him he was gone!

John was just making fun of me for being such a sissy and said I could leave if I wanted. I was not going to be run off if it was just his idea of having some of his friends trying to scare me.

Then we heard some noise. It was low moaning, like crying. Then we saw something dark running across the hallway into a room. At that same time a few of our friends had meet up with us and said they also saw dark things around the bathrooms and heard crying and laughing. They made it a point it was over and time to go, the place was not stable and someone could get hurt.

I watched them leave out another window and run to get the car where they said they would be. We had come in our own car and was not ready to give up. I just wanted something to take back home to show that we were there.

With that image still fresh in my brain I went inside the room where it had gone. I know John was scared then as he kept saying, "Come on, babe, lets go home. Everyone is gone."

The room had tables with straps on them and a sink that was full of some dark fluid that reeked. And then doors and shudders started to slam closed and open again. The glass of one of the doors had broke. I was froze but I managed to grab a piece of glass to protect myself. John said, screw this, and left me alone.

It was dark and I could feel the hairs on my neck standing up. I heard people running towards me and it was the others. They all meet up and went to find us. It was forty-five minutes Sue said and she told me it was time to go now. I asked where was the rest and she said they all got out quick. Then I saw their flashlights moving around the room and said this is just wrong we do not belong here over and over again. She looked at me holding the glass and asked if that was blood? I looked but it was not mine I thought and agreed we need to leave.

We went back the way I had come as she sure was not going the same way they came. George, her brother, said he had saw a woman sitting and rocking back and forth on the floor laughing. And also saw something that looked like a nurse just pass by them and that's when they started to run and found me.

When we made it out every one had the same experiences to some degree and I still had the glass that had blood on it but it was not mine. At that point I no longer needed it nor wanted it.

And to think back on this we were going to bring an Ouija board with us. Ahhh, so glad we did not and have never thought about going into another abandoned place again.

Funny, all the places we have been inside and that one place had so much mystery to it. Sometimes I can still think about it and just wonder if any one has ever decided to go inside that creepy old place.

I now live in TN and will never forget that place in Philly PA. I heard it is still around and have found some info on it..if ya can look it does have pictures also
http://www.opacity.us/site10_philadelphia_state_hospital_byberry.htm