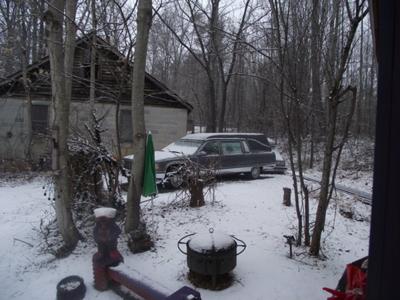 We had just gotten our first Hearse back in 1999 and decided to add Haunted Hearse Rides to our Monster Museum tour. So we went out and bought new flashlights and batteries because our ride is a mile away from our Museum and didn't want to get caught in the dark, not on the road I had picked for our ride.

This road has been known for its spooky haunted stories since my grandma's time. There were several places along the road that has stories on it about murder and such along with the haunted afterward stories as well. The last place I actually was able to stop and let my group out and stretch as I tell them the facts of the place and then the haunted story that goes with it. This particular place my family and I witnessed part of.

A young man that was local to the area some weeks before had quarreled with his girlfriend and in a fit of madness killed her in another state not too far from that spot.

So he packs her up in his trunk and takes her to this old spot in the woods where the locals (including my family) used to take their garbage to throw away. He buries her at the end closer to the woods and goes about his merry way.

Now this would have been the end of the story except that a couple weeks later an old man just happened to take his trash off (just a few hours before me and my family decided to take ours) and after he had deposited his trash he noticed a dog digging and gnawing at something.

It peeked his curiosity and so he checked it out and found that the dog was gnawing on what appeared to be a foot, and then he saw it to be a whole body partially uncovered, so he calls the police and crew (that's when we came along and saw the body being carted out, decided not to stop and never took trash off there again).

So again end of story, right? Not exactly, as I said that was the "fact" part of the story, the haunted part is that people say that you can hear screams or moaning sounds and also the sound of a dog digging in the area where they found the poor dead girl's body.

Now back to our tour, this being my first tour and having all new equipment nothing should have happened, right? Well as I was telling my very first group what I just told you, I was waving the flashlight at the general direction of the old road to the trash pile, and as I did so the flash dimmed each and every time I moved it at the position and then come back up when I moved it away. It was so interesting I had forgotten about my group and was going on and on asking them if they saw this, when I turned around the group had huddled against each other and asked meekly if they could get back in the hearse now, oh, and we did hear a dog howl and in this spot it was and is colder than anywhere else along the road.

Join in and write your own page! It's easy to do. How? Simply click here to return to Ghost Stories.