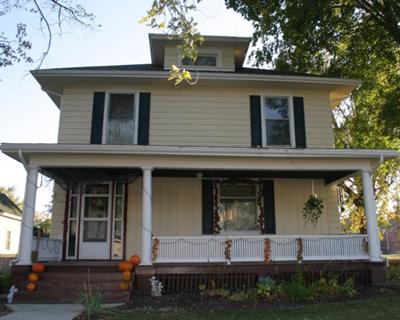 A person would think that growing up in a small town where the only thing that changes is the stop light would have a handle on everything going on.

I would have to say that is a fair statement and about 80% true but what about the remaining 20% of things that happen that you had no idea about while growing up, leaving the small town to pursue happiness then returning twenty years later to only discover some of the remaining twenty percent you never knew about?

This is my story and I am here to tell you about Huntington House. This is the name I gave it not only because that is the street where it is located but also it seems to carry the name well.

When I had returned to this small town, it took lots of adjusting to such a life once again. A person is not the same after leaving then just able to pick up where they left off.

Moving in with my sister to become re-adjusted, I realized I had a lot more to learn. Familiar with the small town I could take any country road and never know matter how hard I tried ever get lost. But no one ever would be able to warn me about events that would take place and add to my collection of true ghost stories of personal experience.

The end of August of last year while out for a drive I seen a for "rent sign" standing in front of this grand home of which I had remembered as part of my childhood but never believing that one day me, myself, and I would ever live in.

I passed the sign and let it go for a couple days thinking it would be so very expensive. My budget would never allow for such a spacious home. Again I passed the house not being able to get it out of my thoughts.

Drove by again and seen the front door was open ... how exciting! A work truck, turned out to be carpet cleaning guys, were in the house and so I decided to stop and have a peek. Walking into the house I had ask one of the guys if I could take a look around and was interested in obtaining more information about the house. He told me to go ahead and take a look but did not know much only that they were here to clean the carpets.

Walking through the house I noted the fireplace located in the living room which made me imagine a warm fire with burning logs on a cold winters night.. the beautiful chandlier that hung in the entry lighting the way up stairs. Increasing excitement grew even more as I counted four bedrooms upstairs, a full bath and another room wrapped with windows that put you in mind of a tree house as you looked around the room and seen nothing but the tree tops and blue sky.

Hmmm, another door in the room, a closet? No another staircase that lead to a full walk-in attic. One would need an intercom system just to keep in contact with members of the family. Two staircases, one in front and one in back from the kitchen this was the greatest. An island in the kitchen, large windows in the dining room, a laundry room also wrapped with windows let the sun shine in! I really found this house to be interesting and charming.

I thanked the guys for letting me explore the house and said I would be back to inquire more about it. Sitting now in my car I looked at the large trees that shaded the house that gave away years of age not only to the house but also the land it sat on. Did I mention the two car garage? What an asset. Hurrying home I needed to discuss this with my sister and share what I had seen and the possibility of living in this grand house. At that point it was only an idea but I needed to make it a reality at the same time if possible.

When she had returned from work, with excitement told her about the house I found today and she had to experience it for herself to believe. She at first laughed and ask me if I was serious... I was never more serious.

The next day luck was with me again, passing the house I noted a truck in the drive but this was a different truck so I pulled around back and knocked at the door, no answer. I decided that the person must be upstairs and not able to hear me so I entered calling hello, anybody here? No answer. I walked upstairs calling hello, but still no answer. Checking every room no one was to be found. Walking back down the stairs and into the kitchen I noticed applications. Yes! I will fill one out, leave it and hopefully whoever was in charge will contact me.

Getting ready to leave out the back door a man came in and was just as surprised to see me as I was to see him. This was the owner of the home who was here doing some painting and finishing touches before renting out the house. This was my lucky day indeed.

We spoke for awhile about the house, the town and my part in renting the house. We had planned to go together and visit the house to discuss price, utilities, and what would be involved.

For a week we bounced back forth, drove past, stopped read the still for rent sign and finally was able to speak with the owner about our application we had put in for the home. I'm not going to tell you my sister who is a believer in fate as I, said if it is meant to be it will be. If not, that's the way it goes.

But we still drove by house even she who worked 2nd shift made it a point to go by after getting off work.

The day arrived when we found out the good news .. met with the owner, money in hand at a reasonable price we could not pass by, and considered ourselves at that moment the sponsors for good housekeeping magazine and this house would be in one of the featured homes of the month.

The months we lived in the house proved to be very interesting from the fireplace to the shadows that passed up and down the stairs during the day.

Our first night while moving in, I lay taking a nap on the airbed we had put downstairs only to wake to the smell of turkey so strong I felt I needed to check the oven... if we had an oven at that time.

I cannot tell you how many times Peggy, my sister, would call downstairs and ask me "what did you say?" thinking she was loosing it, I would respond "I didn't say nothing, what are you talking about?" shake my head and continue with the internet minding my own business.

Peggy worked second shift which left me alone late at night with my daughter, age 10 at the time, to tuck in bed and promise a good night's sleep and early tomorrow.

Walking the house I never realized how large the home really was until I could hear my own breathing and sounds throughout the house brought curious visuals of where they came from or what might have caused them. But with older homes come all sorts of sounds to tickle the imagination.

Things continued to happen out of sorts to each of us but was never shared until we actually sat down and dared to speak to the other about hearing people having a conversation upstairs while sleeping, very faint music playing from upstairs as we sat downstairs relaxing, shadows passing from one wall to the other, walking upstairs then down, my cat, Waffles, for the first night he was here Peggy and I were sitting on my bed talking about our day my door was closed and we felt strange for a moment. We carefully watched Waffles who also lay on my bed stand and look at the door growling.... I had never heard him growl. He was the most laid back cat in the world, but now he was at full attention.

Peggy and I looked at the other in fear of what could have made him scared enough to growl. I never knew a cat could growl until now. We both knew the moment would arrive that the door needed to be opened but, OK, which one of us would do it?

Well it's my room, guess I get the honor. Slow and with held breath I opened the door only to expose a dark hallway... nothing to see or expected to see.

Peggy followed me as we walked the hall and the rooms but nothing was to be found. Time passed and we grew accustomed to the strange chain of events that happened after that. Things being moved, door closed when leave a room but open when return, the shadows, voices of people talking, faint music.

We thought that was bad enough until laying in bed, I had felt the mattress give a little expecting Waffles, my cat, or Meow Meow, Peggy's cat, to want a head rub. I waited but nothing happened... I sat up and called the cats thinking they were hiding. I got out of bed turned on the light but nothing to be found.... The same had happened to Peggy, the jump of the cat in bed feel but nothing.

I had shared this new information with her one day and she had said "It's strange you said that because the same thing happened to me." Funny enough but now as I think about it Peggy never stayed a night here by herself the entire time of living here.

We discussed of having a professional group here to investigate the house and even spoke to the persons in charge of such thing... after all we had told them they were anxious to come and experience the events personally with equipment, of course, but for reasons never got a chance to visit for times that never matched our schedule for both of us to be present.

We still are on the list of houses to explore with just a phone call to schedule.

Today? Yes, we have become adjusted to the unexpected as no harm or violent things have ever happened ...maybe only curious of a new world? Maybe. Our computer batteries die, cell phones drained, clock batteries need replaced often and faint music still plays upstairs while we relax downstairs.

I refer to it as coexistence or a blast from the past.